Posted on October 23, 2018 by thomasdinnocenzi 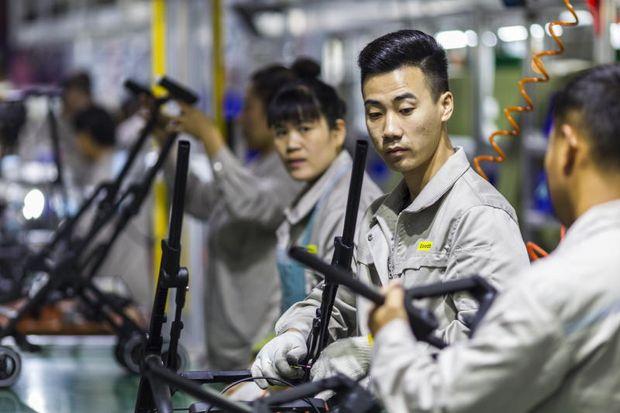 Southeast Asia is seeing a boom in foreign direct investment as the intensifying trade war between the US and China prompts companies to shift production to the region.

Vietnam saw manufacturing inflows jump 18% in the first nine months of 2018, driven by investments including a $1.2 billion polypropylene production project by South Korea’s Hyosung Corp, according to a Maybank Kim Eng Research Pte note on Monday.

In January through July, Thailand’s net FDI rose 53% from a year earlier to $7.6 billion, with manufacturing inflows surging almost five times, according to central bank data. In the Philippines, net FDI into manufacturing surged to $861 million in the same period from $144 million a year earlier.

“The US-China trade war may be attracting more firms to set up in Asean to circumvent the tariffs,” Maybank economists Chua Hak Bin and Lee Ju Ye said in the note. “Sectors such as consumer products, industrial, technology & telecom hardware, automotive and chemicals have indicated interest in Southeast Asia.”

Southeast Asia is finding there’s some upside to the trade war, as it becomes an alternative base for firms relocating production away from China to avoid levies. About one-third of more than 430 American companies in China have or are considering moving production sites abroad amid the tensions, according to an Aug 29 to Sept 5 survey.

“Escalated trade tensions only accelerate the ongoing trend,” said Trinh Nguyen, a senior economist at Natixis Asia Ltd in Hong Kong. “Southeast Asia serves both as a great growth market, a place to offshore thanks to lower costs of production and liberalisation of trade, as well as a source of mitigation from geopolitical risks.”

Still, the region certainly isn’t immune to the fallout from the dispute — a report released on Tuesday cited the trade war as a factor in Thailand’s unexpected exports slump in September.

Posted on August 20, 2018 by thomasdinnocenzi

The retail business landscape in China has been evolving, with millennials poised to be a key factor in the game-change.

The ZTE Debacle Has Exposed A U.S.-China Rift — Here’s What It Means For Global Business

Washington and Beijing recently concluded days of fraught negotiations and have announced that there will be no “trade war.” This is no surprise. The real news, however, is what the negotiators failed to mention. Conspicuously absent from official news briefings were any references to ZTE, China’s largest manufacturer of telecommunications devices—which, as it turns out,  represents a microcosm of the bigger challenges confronting U.S.-China relations.

ZTE a symbol of China Inc.

ZTE has benefited hugely from China’s economic policies. As a tech company, ZTE has been on the receiving end of generous funding via Beijing’s “Made in China 2025” master plan, which has become a major stumbling block for U.S.-Sino relations. The plan, which is dedicated to subsidizing Chinese innovation in ten key technology sectors, including AI, robotics and telecommunications, has incited a backlash within the U.S. political establishment and resulted in a flurry of countermeasures, including U.S. sanctions, blocked acquisitions and export controls.

The ZTE story is now well documented. So far, the company has paid U.S. governmental agencies $890 million dollars in penalties—out of a $1.19 billion assessment—for violating U.S. sanctions and export control laws. Recently, after ZTE failed to meet the conditions of its negotiated settlement, the U.S. Bureau of Industry and Security (“BIS”) announced a seven-year ban on the sale of U.S. parts and components to ZTE.

ZTE is now on the verge of collapse. But Liu He, the lead Chinese negotiator and chief economic adviser to president Xi Jinping, appears to have left Washington with no resolution to the debacle.

There are both general and very specific lessons to be learned from ZTE’s predicament.

In general, U.S. sanctions are an economic weapon of mass destruction: they detonate suddenly and spread collateral damage quickly to the farthest reaches of a business ecosystem, impacting suppliers and manufacturers, logistics companies and many other third parties. Given the complexity and interdependence of global value chains in the tech sector, this makes regulatory compliance a matter of life or death.

The importance of corporate governance

ZTE’s predicament can be tied to a massive failure of good governance and ethics. Chinese firms are notoriously opaque, which promotes a culture of secrecy, distrust and managerial uncertainty. After negotiating with the U.S. government to reinstate its business license in 2017, ZTE agreed to discipline 39 employees that had actively engaged in the destruction of evidence and the obstruction of justice. Instead, it was learned that none of these employees were disciplined and some were actually rewarded with bonuses. The ZTE sales ban swiftly followed.

If Chinese firms are to become bona fide global players, they will need to adopt better governance practices.

U.S. law requires that if any foreign made item—fabricated by any foreign company—uses more than 10% (by value) U.S. “controlled items” or technology, the entire product is subject to U.S. laws. That means that a product that is 90% Chinese origin still needs to be traced all the way to its end user, and can’t be sold to any “denied parties” if there is U.S. technology inside. The problem is that there are thousands of denied parties on export control lists, and new names are added every day.

Managing this process is a daily nightmare. Imagine trying to track hundreds of thousands of sub-components and partially assembled gadgets as they are move around a global supply chain and end up in finished products around the world.

Technology will eventually solve this problem. The next generation of smart digital tracking devices will rely on the internet of things (IoT) and the cloud will enable tracking of even the tiniest components—including where they originate, who had contact with them and where they end up.

In order to ring-fence business operations that are subject to export controls, new ecosystems will emerge that include firms that have been vetted for transparency, traceability and good internal controls. According to Greg Nichols, a principal at Tradewin Asia–a global supply chain advisory firm–many of the world’s top multinationals are reevaluating how to move critical operations into safer environments. “Multinationals are actively looking for ways to reduce over-exposure to high-risk business environments with poorly enforced corporate governance standards.” said Nichols.

Global supply chains that have taken decades to evolve are now fragmenting and re-organizing around new clusters of firms, increasing the likelihood of some Chinese companies being left out in the cold or forced to form their own ecosystems.

Alex Capri is a senior fellow at the National University of Singapore, where he teaches in the business school and in the Lee Kuan Yew School of Public Policy.

Thomas D’Innocenzi is an Independent Consultant located in Asia and                       the United States.  Contact me today to increase your global market.

BEIJING — China’s overseas shipments rose from a year earlier as global demand held up and trade tensions with the US were kept in check amid ongoing talks. At home, resilient demand led to a rise in imports.

Exports rose 11.3% in June in dollar terms, the customs administration said Thursday, more than the estimate of 8.9% in a Bloomberg survey

Demand for Chinese products has proven resilient this year as global demand holds up. Tensions with the country’s largest trading partner also appear to be easing after 100-day trade talks due to end on July 16 have signalled some progress toward addressing the deficit run by the US, which last year reached $347 billion.

At the same time, the stronger-than-expected import reading bodes well for second-quarter gross domestic product growth, due for release Monday, as it may signal that domestic demand hasn’t succumbed to greater curbs this year on lending or the property market.

“Today’s upbeat figures point to still-strong foreign demand for Chinese goods, as well as fairly resilient domestic demand,” said Julian Evans-Pritchard, China economist at Capital Economics Ltd. in Singapore. “We are skeptical that the current pace of imports can be sustained for much longer given the increasing headwinds to China’s economy from policy tightening.”

“We still expect export growth to slow in the second half 2017 on stronger renminbi so far this year, and uncertainties in external demand,” Zhao Yang, Nomura Holdings Inc’s chief China economist, wrote in a note. “The cooling property market leads to slower domestic investment growth, which may weigh on import growth as well.”

“The strength of Chinese exports is a positive sign for global demand,” said Rob Subbaraman, chief economist for Asia ex-Japan at Nomura Holdings Inc. in Singapore, adding that shipments are largely comprised of finished goods that show genuine end-demand. “Imports point to strong Chinese demand, raising the chance that second-quarter growth is stable to higher than the first.”

• In the first half, exports in yuan terms rose 15% compared with the same period a year earlier, to 7.21 trillion yuan